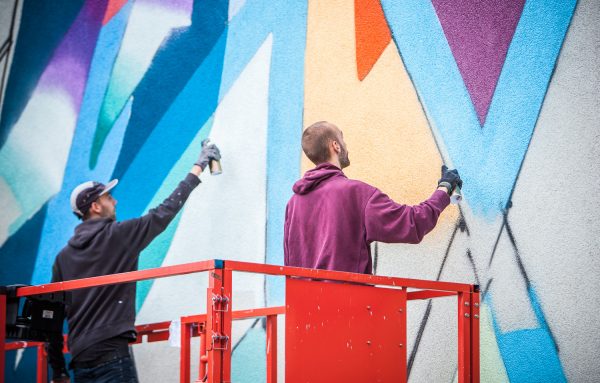 Born 1991 in Belgrade, Serbia. Sobekcis is a duo of twin brothers, working in many forms of visual expression. For them art and visual expression was something they were both interested in from early childhood .

Maybe they can say that it is the first thing that both of them considered as something they would like to develop for the remainder of their lives , and considering this , somehow one would say that coming to the point of putting their heads together was just a matter of time. Till the start of high school both of them homed their drawing skills in their personal ways thus developing

a different sensibility and approach to art . But because having such a connected upbringing a unified style was something that just came naturally, realizing each others weak and strong points brought them to the realization that a unselfish approach to art was the way to go,that two minds working on the same problem always conceives a better result and quicker problem solving .

The start of High School of Design in Belgrade, is when both got amerced into graffiti culture. And versus this it was a introduction in to the world of studying art through a institution , witch through itself brought discipline to their work.

To both of them graffiti came as the first realization of being part of something bigger ,being part of a movement. Graffiti came with new ways to project their work on a larger scale and in more haste then they had been in touch with until then.

Even though they where not aware of this at the moment , Graffiti would form there approach to art and life in general.

Both graffiti and a early start with art education brought them to aspire to to expand . Moving to Vienna Austria to study Graphic design at the Applied Arts Academy (Die Angewandte Kunst Wien) was the first contact with life in Europe and more open view towards graffiti and art in general,and making the first steps in entering the gallery world and removing themselves from the label of being just graffiti writers, and embracing the tittle of artist.

In the current evolving world of Sobekcis there has become the overwhelming interest in Balance. Whether it is balance between the two ,balance in color and composition.or you could say balance in everything they undertake.

Behind the eyes and animals ,deconstructed lettering and abstraction graffiti grows beyond itself and takes a life of its own, so they look at it as their task to take the chaos and bring order to it ,take something witch has been broken down from its original form and reconstruct it and bring “Balance back” to the image.